Co-Dependency is an areas that I speciallized in. I have had my own share of codependency issues in my life. I remember than when I went to therapy and was told that I had codependency  issues I was quite suprised. Who me?  I was just trying to help my elderly parents. The fact is that most people who have co-dependency issues are really nice people and they mean well, but what they
don't realize is that they are living their lives trying to take care of every one else but themselves! I was ironic that when I started my practice, I noticed that a large number of my client also had
co-dependency issues. when I tell them that they have codepency issues they are often as suprised as I was when I was told that. One client thought that his wife was a codependant until he started
going to meetings and finding out that she was the dependant and he was the co-dependant. The things is that codpendency is on the spectrum. People with codpendency issues range from those
who grow up in famiies with subatance issues to people who have always been senstive and somehow during their childhood felt responsible for fixing all the issues in their family. People who grow up in families with subtance abuse issues such as alcholism sometimes end up marrying some one with subtance abuse issues and trying to "fix" their problems. The is specially common in women who are thought to be caregivers. Codpendency is living your life through some one elses life. I have seen clients dragging their partner with subtance abuse issues to therapy when they had no interest in getting help. People with codependency issues often stay in relationship that are abusive or imbalanced. 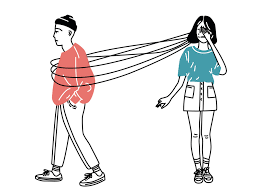